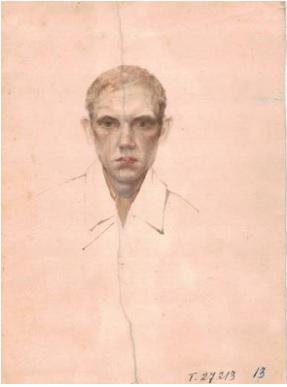 Yevgeny Ivanovich Righteous lived in Totma for about ten years. It would seem that this is a fairly small period of time, on the other hand – a lifetime. He arrived in 1917 with his wife and daughter from Petrograd, where he taught drawing at one of the cadet schools. He has studied at the Penza Art School, participated in the work of the New Society of Artists in St. Petersburg. According to some reports, he studied at the Academy of Arts in the workshop of D.N. Kardovsky. It is quite possible that he did not finish his studies, since his name is not on the lists of graduates of the Academy. In Totma E.I. Righteous continued his pedagogical activity, taught at the Totem Petrovsky Craft School in the drawing class, and was also the head of the art department. In the early 1920s, he went to work at the Totem Museum of the local region as head of the historical and archaeological department.

He is credited with the discovery and research of a number of archaeological sites. In 1918, the Neolithic Chernyakovskaya site was discovered, which became the site of the first archaeological excavations in the Totemsky district. Together with N.A. Chernitsyn, E.I. Righteous discovered and explored a number of other monuments: the Borovskaya, Krestovskaya, Pustoshensky burial ground, Starototemskoye settlement.

E.I. Righteous traveled a lot around the area, made sketches of monuments of wooden architecture. It was he who took the initiative on the uselessness of destroying monuments of iconography and church decorative and applied art, as well as that they should be kept in a museum. At the same time, he collaborated with the magazine “Crocodile”, where he bitterly ridiculed the clergy and religion under the pseudonym “Alexander Topikov”.

In the museum, he served as a graphic designer, worked on the creation of exhibitions. He performed particularly large-scale works together with F.M. Vakhrushov. It is obvious that the relationship between them was friendly, which is proved by a friendly cartoon by the authorship of E.I. Pravodnikov, depicting Feodosiy Mikhailovich at an easel. Together they played on the stage of the Totem Theater. In newspaper articles and in the memoirs of contemporaries, it is noted that the brightest images were obtained just from them.

In 1927, on the initiative of E.I. Pravodnikov, a large-scale historical and ethnographic expedition was to take place on the territory of the district. He asked the authorities for some provisions and a tent. But the trip did not take place, and Yevgeny Righteous and his family left Totma forever. He lived in Moscow, worked as an illustrator in the publishing house “Children’s Literature”. Performed works, including for books by N.L. Dilaktorskaya. In 1936, his personal exhibition was held at the Tretyakov Gallery. A year later he was arrested on denunciation. E.I. Righteous died in prison in 1940.

The collection of the Totem Museum Association contains more than 250 of his paintings and graphic works, archaeological artifacts found by him, as well as reports on the work done. On the draft of one of them there is an inscription made by the artist’s hand: “Know yourself”