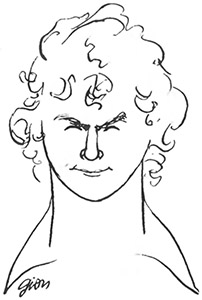 He was born on January 16, 1946 in Bucharest.
By profession – engineer. He made his debut in 1968 in the “Urzika” newspaprer.
Participated in exhibitions in his motherland and abroad.
Republican awards: the prize of the magazine “Urzikam”, the award of the Artists Union of the Republic of Germany, a prize at the exhibition of newspaper cartoons in Timisoara.