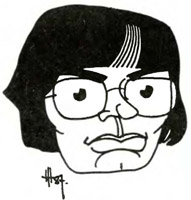 Born in 1943.
The first caricature was published in 1972 in the Edazi newspaper.
Since then, in her free time she draws caricatures.
Her work appeared in the magazines “Pikker”, “Pioneer”, “Noorus”, in the newspapers “Sirp I Vazar”, etc.
It was published in the collections “And Laughter and Sin”, “Beauty Salon”, “Handicap”, in the catalogs of the exhibitions “Nobody makes fun of the winners!”, “What’s so funny?” and exhibitions of the Baltic cartoon (Tallinn, 1976; Vilnius, 1981, 1984), in the album “Sixteen Authors”. She participated in all-Union and international exhibitions held in Tallinn, Vilnius, Odessa, Lviv, Marostica.
She had three solo exhibitions.