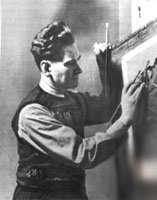 Born April 26 (May 9), 1911, in Ivanovo-Voznesensk, present day Ivanovo; died Sept. 19, 1972, in Moscow. Soviet graphicartist. People’s Artist of the USSR (1971); corresponding member of the Academy of Arts of the USSR (1954).
Became amember of the CPSU in 1945.
From 1929 to 1931, Prorokov studied under D. S. Moor and P. Ia. Pavlinov at the Moscow Vkhutein.He worked for the newspaper Komsomol’skaia pravda and for the magazines Smena  and  Krokodil.
During the Great Patriotic War, Prorokov participated in the heroic defense of KhankoPeninsula and was a member of the press corps at the front.
Between the late 1940’s and 1970, Prorokov produced his most important works thematic series of drawings that resembleposters in format.
These works are devoted to the people’s struggle for peace and against imperialist
aggression andreaction and social and racial inequality. The drawings are publicistic in character and filled with emotion.
They integratetechniques of drawing, poster art, and caricature. Movement and gestures are dynamically rendered, and there are vividtonal contrasts.