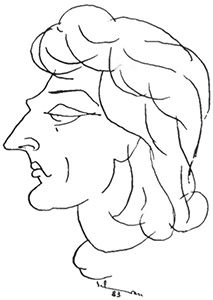 He was born on June 11, 1955 in Karansebesh.
He graduated from the Polytechnic Institute in Timisoara, where he worked as an engineer.
Since 1978, he is the official cartoonist of the international festival in Konfolan. He took part in the activities of the creative workshops of the International Council for Fine Arts and Folklore at UNESCO (France).
He had four personal exhibitions in the country and six – abroad.
During his career he have got 27 awards.