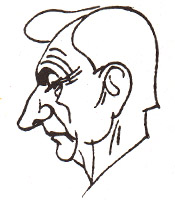 He graduated from the Teacher Training College in Ostrava and after ten years of working as a teacher in various schools, he began to study at the Faculty of Applied Arts and the Academy of Fine Arts in Prague in the national artist prof. Ant. Pelc.

His first cartoon was published during his studies in Ostrava in 1938 Dikobraz magazine then published until 1945.

Most of his works are notable for the amazing inventiveness, vivid imagination and the ability to identify the basic essence of the idea in so eloquent and logically clear form of composite construction that verbal support and interpretation is almost not needed.

He died December 22, 1994 after a long and severe illness. Buried in Granize.