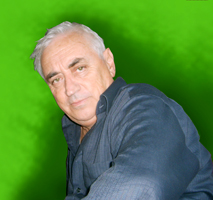 Born in 1940. He graduated from the Faculty of Philosophy with a degree in art history. He was interested in caricature from early childhood, but actively began to study it in 1969. He was a regular contributor to Pavliha – Ljubljana, Borba, Expres-Politika and Jez – Belgrade, Oslobodjenje – Sarajevo and others.
One of the founders of the Cartoonists’ Association of the Republic of Macedonia. He was its first secretary since 1981, the initiator and organizer of the first Macedonian exhibition abroad in Legnica, Poland in 1980. He held solo exhibitions in Amsterdam 1984, Trento 1989, Skopje and some other cities in Macedonia. In 1977 he released the author’s collection “Horns” (Horns).
In 1990, at the invitation of the Andromeda Festival in Trento (Italy), he held a solo exhibition and released the Apartheid compilation.
Author’s works are presented in many caricature museums in the world, such as Tolentino, Trento, Tehran, Gabrovo, Berlin, Istanbul, Mexico, Warsaw, Montreal, Rio de Janeiro and others.
Illustrated several textbooks for primary and secondary education in the Republic of Macedonia. He constantly collaborated with renowned comic and satirical magazines and newspapers – “Mebeshpalter” in Switzerland, “Black on White in Color” and “Evening” in Macedonia.
Printed in the satirical magazine “Osten” and the daily newspaper “Diary”, Skopje. Lives and works in Skopje.
Winner of more than 150 contests cartoons.