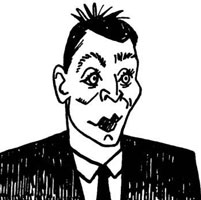 Born on June 7, 1956
1980 – 1984 – Studio of young cartoonists at the Soviet magazine “Crocodile”.
He studied with outstanding masters of this genre.
By the end of the 80s – one of the leading artists and twice winner of the (1986 and 1989) “Crocodile”.
Closely collaborated with “Crocodile” until 1991
1992 – 1997 – full-time artist in the “Legal Gazette”. It was during these years that the newspapers were very loudly successful in the State Duma.
He drew political cartoons.
In Soviet times, he took part in exhibitions both in Russia and abroad.
Since 1986, he began to collaborate with many children’s art and pedagogical publishing houses. For the studio “Filmstrip” made a dozen filmstrips. Illustrated about two hundred children’s books and textbooks.