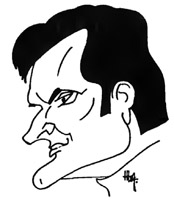 Was born in 1963.
The son of the cartoonist Ewald Piho.
He worked as an artist in Tallinn Promtorg.
His cartoons were printed in many republican newspapers and magazines and in the exhibition catalog “What’s so funny?”.