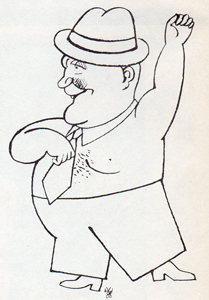 Ewald Piho was born in 1923 in Tallinn, studied at the School of Industrial Art at the printing department. After the war, he continued his studies at the Tallinn Technical School of Physical Culture, which he successfully finished in 1949 and worked as a physical education teacher.
In his free time, the future artist began to draw caricatures. The editor of the sports newspaper liked his works and started publishing them. In 1956 33-year-old Ewald Piecho finally resigned as a sports administrator and became a professional caricaturist. He was eagerly published by many newspaper and magazine publications of the republic; publications in the satirical magazine Pikker were especially frequent.  n the following years Evald Piho, already a member of the Union of Artists of the USSR, participated in many republican, all-Union and international exhibitions and caricature contests, became the winner of three contests of cartoonists from the Baltic states. In 1969, at the International Caricature Exhibition in Moscow, Piho was awarded the second prize. He published two books of cartoons, in collaboration with colleagues – several satirical collections.