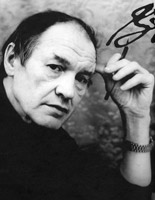 Cartoonist
Was born in 1944 in Moscow. Studied at the art faculty of Moscow Textile Institute. His first cartoon was published in the Smena magazine in 1986. Thousands of his works have been published almost in all newspapers and magazines of the ex-USSR, and modern Russia since.
As an artist-producer he has made a number of animated films. Participant and laureate of various exhibitions in the USSR and abroad. Laureate of the Zolotoy Ostap Festival (1995).