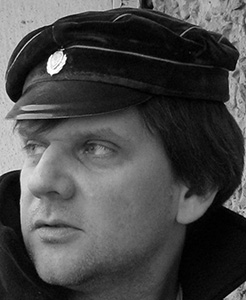 He was born on July 3, 1967, in the city of Zheleznovodsk, Stavropol, Russia.
He graduated from the Stavropol Art College in 1986.
From 1986 to 1988 he served in the Soviet Army.
From 1988 to 1999 he worked as a drawing teacher in the schools of the city of Stavropol.
The first caricature was published in the Stavropol newspaper “45 parallel” in 1990.
Published in Stavropol newspapers “45 parallel”, “Provincial Gazette”.
He was published in the central newspapers and magazines “Kukumber”, “Novy Ochevidets”, “Reis”,
“Rural Nov”, “Crocodile,” “Financial Control.”
He illustrated such books as “Tais of Athens” by I. Efremov, “Countess De Monsoro” by A. Dumas,
“The Black Corsair” by E. Salgari.
Took part in Russian and foreign exhibitions.
Since 1999 he is an artist in different animation studios of Moscow.
He took part in the creation of animated films “Other world”, “The Nutcracker”
“Knyaz Vladimir”, “The Song of the Stormy Petrel” and many others.