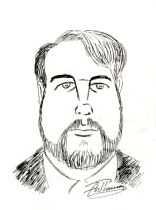 From 1972 to 1976 he worked as a graphic artist at TV.
In 1978, the first cartoon of him was published in the Literaturnaya Gazeta. Since 1979 he is a free artist. In 1979 he joined the professional union of graphic artists. Since 1991 – Member of the International Federation of Artists of the Artists Union of Russia.
Since 2007 – Member of the Moscow Union of Artists.
Prizewinner and laureate of Russian and international cartoon contests.