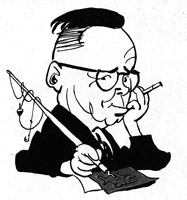 Born in 1910.
Lost his father very early.
Since the childhood he was addicted to drawing.
Seventeen years old Ostrovsky came to the editorial office of the youth newspaper “Reserves” (Volgograd) — and stayed there for his whole life as an artist and a journalist. He wrote headlines, painted portraits, posters. But most of all — caricatures.
During the war P. Ostrovsky was an artist of divisional and army newspapers. After the war, he often published in the newspaper “Volgogradskaya Pravda”.
Drew for “Crocodile”, illustrated funny children’s books, participated in exhibitions.

“The Masters of the Soviet Cartoon”