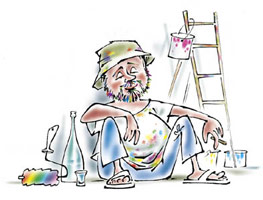 Born on December, 30, 1953 in Leningrad.
In 1977 graduated from Leningrad Mechanical Institute and in 1984 from the department of design at Mukhina Higher Arts-Industrial school in Leningrad.
Worked as an engineer-designer, and later as an artist.
The first cartoon was published in 1976.
Published many works in the newspapers and magazines, participated in cartoon exhibitions in the USSR and abroad.
Was awarded with a number of the honaurable prizes for victories in competitions of humour pictures.
Member of the Union of journalists and the International federation of the artists.
Works in advertising, books and graphic design.