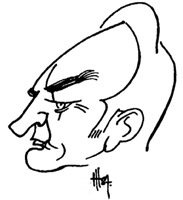 Born in 1925.
Published cartoons since 1959.
2,800 comic pictures by him were published, including 775 put in “Picker”. More than a thousand of his drawings were published on the pages of the newspapers “Rahva Khial” and “Ykhtulekht”.
He participated in almost all republican contests and received 14 different prizes.
Took part in the collections “Without Words” (Tallinn, 1967), “Fata Morgana” (Tallinn, 1968), “We have a guest” Picker “(from the series” Masters of Soviet Cartoons “),”Laughter and Sin”, “Beauty salon”, in the exhibition catalog “Over the winners do not joke!”, etc.
Having started drawing almost three decades ago, he decided not to give up until until he masters it thoroughly.