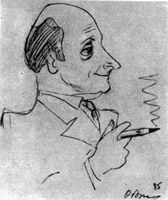 Was born July 10, 1930 in the Leningrad, USSR. In 1951 he entered at the first course of painting department of the Leningrad Institute of Painting, Sculpture and Architecture named after Ilya Repin. He studied of Vladimir Gorb, Valery Pimenov, Vitaly Valtsev, Rudolf Frentz.

In 1957, Dmitry Oboznenko graduated from Leningrad Institute of Painting, Sculpture and Architecture in Josef Serebriany warkshop. His graduation work was painting named “Nightingales”, devoted to the memory of soldiers of the Great Patriotic War (1941–1945).

Since 1957 Dmitry Oboznenko has participated in Art Exhibitions. He painted portraits, genre and battle paintings, landscapes, sketches from the life. He worked in oil painting, pencil drawings, watercolors, and satiric posters. The most important paintings that brought recognition of Dmitry Oboznenko, were devoted to the theme of the Great Patriotic War, the image of the Russian soldier, a moral victory in the confrontation of cruelty and evil. In 1978 Dmitry Oboznenko was awarded the honorary title of Honored Artist of the RSFSR.