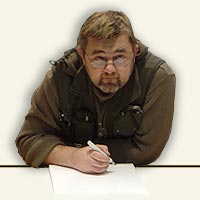 German artist, Russian origin. He lives and works in Berlin. The owner of the art gallery “Amita” (Berlin). The main artist of the multimedia concern “RusMedia.” In each issue of the newspaper “Russian Germany” there is a “corner of Glory”, where his cartoons are printed. For 13 years in the newspaper published more than 5000 cartoons, illustrations and comics.

Specially commissioned by Professor Jürgen Junck from the University of Nuremberg, he created a theme from 50 drawings “The Psychologist and the Patient.”

He worked as an artist-decorator on the shooting of the film “Pianist” by Roman Polanski (the film received several Oscars, including for the work of decorators). Invited as an actor and artist by French director Jean-Jacques Annot in the Hollywood movie “Enemy at the Gates.”

The film “Taking Sides” (Opinion of the Parties) by Istvan Sabo (2001). Decorations at the Villa Siemens and filming at the studio Babelsberg.

The artist in the film Joe and Max, directed by Steve James (USA – Germany). Personal exhibition (September 2003) on the personal offer of the mayor of the Berlin district of Neukölln, Mr. Heinz Buskowski.

He created the whole project “Feline people”, within the framework of which he wrote more than 500 works. The characters of this project were not only ordinary cats, but real famous people: Mireille Motier, Victor Sukhorukov, Claudia Rott (head of the German Green Party). The project was highly appreciated by Mikhail Zhvanetsky and Mikhail Shvydkoi.

I gave lectures for future graphic designers at the branch of the Hamburg Higher Technical School of Art in Berlin, at the invitation of the school’s owner, Mr. Klaus D. Benefield. The personal exhibition “Untold Tales” (35 works on the themes of Japanese fairy tales, which he himself composed) was opened by the Chancellor of Austria, Mr. Gusenbauer, at the Hilton Hotel in Berlin. In his collection the Chancellor purchased several works of Nikolayev. Nikolaeva’s work adorned the cover of the catalog of the contemporary art auction at Unter den Linden. At the auction works of the top modern German artists were exhibited.

Participation in the exhibition Art Automobile, conducted by AKB-Bank with inclusion in the catalog. Proposal for cooperation from the Wolkswagen concern.

Cooperation with advertising agency PixelPark.
Development of comic characters for Junior magazine.
Creation of an advertising concept and design of the office of the telephone company Telecountry. I drew 15 plots for postcards on the orders of Berlin publisher Joker. Postcards were sold in 5 countries of Western Europe.

He created his own unique style, invented his unique technique for writing paintings, which in January 2009 was written by the German business newspaper Die Welt. In the February 1999 issue of DAS MMAGAZIN magazine a five-page article about a talented Russian artist.

Critics call this technique of writing “Metaphysics”, which speaks of the profound philosophical content of his work. Buddhists use his individual works from the “Sticks” series as a means for meditation.

Nikolaev’s paintings, written in new technology, are highly appreciated by the intellectual public of Europe. Deutsche Bank is preparing an exhibition of his works in his Berlin branch. In June 2009 Nikolaev was invited as the main political artist of a cartoonist for a multimedia Internet project. His first political caricature is dedicated to Mr. Steinmeier, the candidate for Chancellor of the Federal Republic of Germany. After assessing the level of his work, German politicians and their European colleagues expressed their readiness to be the characters of his caricatures.

German critics consider Nikolayev the most talented artist in Germany.