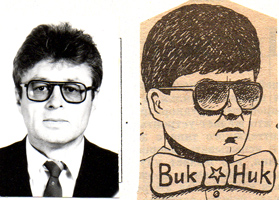 He was born on April 30, 1946 in the city of Shimanovsk in the Amur Region.
From 1961 to 1966 served in the ranks of the Soviet Army.
He graduated from the VST MO in 1971.
The constructor, deputy. chief of design bureau.
He worked as a turner, fitter, installer of iron-concrete structures.
The first caricature was published in December 1966 in the newspaper “Red Banner” (Vladivostok).
Since 1975 he has participated in more than 40 domestic and international cartoon contests. Spent more than 13 solo exhibitions.
Laureate of more than 20 competitions of caricature. The most significant of them:
the prize of the “Economic Newspaper” (1984);
more than 10 prizes from seaside newspapers (70-80’s);
The Grand Prix in Magadan (1987);
prize in Togliatti (1988);
prize in Odessa (1991);
incentive prizes in Sofia, Tolentino and Cuba.
Published in more than 40 periodicals, including abroad: in China, Germany, Bulgaria.
The initiator and organizer of the international competition “Man and the Ocean” in 1990.
Organized a club of cartoonists “Klyus” in 1990.
Hobbies: photography, amateur filming.