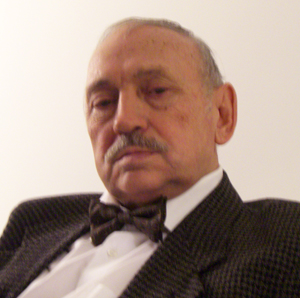 Born in Moscow 14 May 1940.
The first cartoon was published in the newspaper “Izvestiya” (“Известия”) in 1965.
Was published in periodical editions “Smena”, “Soviet Union”, “Tourist”, “Nedelia”, “Komsomolskaya Pravda”, “Krokodil”, “Literaturnaia gazette”, “Vecherniya Moskva”.
Was published abroad in Italy, Bulgary, England, Germany.
Constantly contributed to the magazine “Fraie Welt” East Germany.
In 1975 won The Main Prize (Grand Prix) – Golden Ezop” at the International Festival of Humour and Satire in Gabrovo (Bulgary).
In 1980 two collections of cartoons were published in Soviet Union – “The masters of Soviet Cartoons” and “Automobile humour” in the East Germany publishing house “Oulenspigel”.
In 2013 collection “300 cartoons” was published.
In 2016 a book “Complete collections of works” was published in Moscow, illustrated by cartoons of the author.
Currently he is a professor of Moscow Institute of Architecture,
Merit Architect of Russian Federation,
Academician of Russian Academy of Architecture and Building Science,
Academician of International Academy of Architecture,
PHD in architecture.

When in 1975 year from Gabrovo (Bulgary) International Festival of Humour and Satire came information that the main prize -“Golden Ezop” win soviet cartoonist Andrey Nekrasov , it was met with the smile of satisfaction not only by stone faced specialists in sphare of humour, but and broad circle of readers, already having a habit to smile from ear to ear , looking to his drawings.
In Andrey Nekrasov ‘s draws is rare unity of humo urist and artist. Here is a full harmony of a thin, elegant and in the same time contemplative line with the idea of the cartoon. A man, once seeing his drawing , never mistaken Nekrasov’s stile with stiles of other authors , that is especially valuable quality, called a face of an artist . And Andrey Nekrasov’s face , a man usually rather serious -a broad smile , from time to time transforming to loud laughter .For all of us is especially pleasant appearance of this small book in a moment , when the author , busy with his main work ( he is a senior lecturer of Moscow Institute of Architecture) have less and less time for cartoon. better to be otherwise .
Olso this meaning , I think, not match with a point of view of administration of above mentioned institution.
By the way, his love to architecture Nekrasov transfers in humouristic drawings. Look as he is filled with numerous strict details , making him realistic, in spite of all absurdity and grotesque of comic situation.
Humouristic attachments of Andrey is very broad. about 20 miny devisions  of the collections each of them can be enlarged and transformed to a separated book ( that ,by the way, already is published – in German Demokratic Republic in publishing house “Oulenspigel” is prepared to publication the collection of Nekrasov ‘s “Automobile Humour”).
But when we are speaking about an artist, using many words is not necessary.
Open the book. In front of you is an exhibition of Andrey Nekrasov”.
This text was written by famous cartoonist – Oleg Tesler.