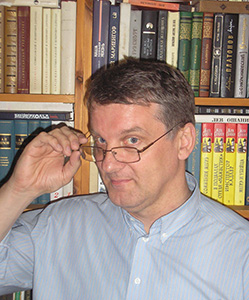 He was born on September 5, 1957 in Moscow in a family of scientists.
Graduated from the French special school in 1974.
Graduated from the Faculty of Geography of Moscow State University in 1979.
Defended his thesis in 1986 (Institute of World Economy and International Relations).
Graduated from art school.
The first cartoon was published in 1983 in the magazine “Smena”.
He was published in Trud, Moskovsky Komsomolets, Sobesednik, Moskovskie Novosti, Gudka, Peasant, and many other Soviet newspapers and magazines, as well as in Bulgaria, Czechoslovakia, China, France and In Canada.
Later, in the 90s, he was published in the renewed magazine Crocodile, True Stories, That’s Right, Unravel, Good Advices, Favorite Cottage, and others.
Took third place at the International exhibition of caricature Penalty-88 in Zaporozhye.
In 1984-1986 years twice became the second in the competition of caricatures of the newspaper Trud.
Received a special prize at the Humorin-89 in Odessa.
In 1990 became a laureate of the International Contest of Cartoonists, organized by the Chinese newspaper “Gongzhen Jibao”. As a reward for this he received a diploma “Messenger of Laughter”.
He was a participant and a diploma of contests of caricatures in Moscow, Odessa, Zaporozhye, Chelyabinsk, Voronezh, Kaliningrad, etc.
After the collapse of the USSR, he was engaged in business, and since 2003 – a writer and translator from the French language, a member of the Writers’ Union of Russia, the author of 117 books published in a general circulation, long over 1 million copies. The most significant of them are: “Antinapoleon”, “Famous Russians abroad”, “Ten riddles of the Napoleonic Sphinx”, “Power and Fate”, “Russian Nice”, “Marquis de Sade”, “Love and villainy of geniuses”, etc. . Plus five biographical books for the ZHZ series (Barclay de Tolly, Salieri, Torquemada, Marco Polo and Talleyrand).
Cooperates with leading publishers: “Exmo”, “AST”, “Young Guard”, “Veche”, “Corpus”, “Hachette”, etc.
At one time he was a member of the club of cartoonists under the newspaper Moskovsky Komsomolets.
Member of the Union of Journalists of Russia (published more than 250 articles in various newspapers and magazines).