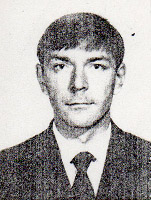 Was born in 1959.
The first publication appeared in 1986.
Contributed to the republican and central media.
Took part at International and domestic cartoon contests.
Was awarded with “The prize for the best computer” at the contest “The Machine and the Man” (Voronezh, 1989).
A member of the Club “Hopak”.