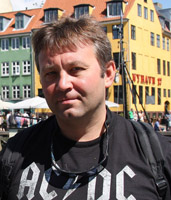 He was born on October 8, 1968 in Syktyvkar, Russia.
He graduated from Syktyvkar State University, faculty of history, and then from the Academy of National Economy in Moscow.
After serving in the Navy in 1989 he started his creative work as an artist in the cinema, then worked as a designer, artist and executive secretary in various media outlets in Syktyvkar and the surrounding area.
He published the first cartoon in 1990 in the newspaper “Evening Syktyvkar”.
Contributed to the central and republican papers: “Interlocutor”, “Express-newspaper”, “Evening Syktyvkar”, “Youth of the North”, “Zyryan Life”, “City Gazette”, “Word and Business”.
Participant and laureate of several international and domestic cartoon contests.
Made illustrations for various publications, articles and books.
Is an employee of the newspaper “Youth of the North” and an Internet resource “BNKomi”.
His works are included in several collections of cartoons, books, disks.
In addition to caricatures, she is engaged in painting, design, photography, tattooing, playing guitar.