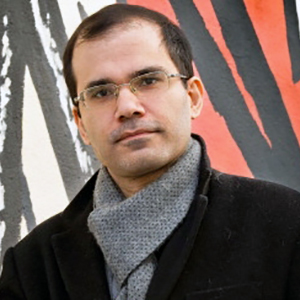 Mana Neyestani (born 1973 in Tehran) is an Iranian cartoonist, illustrator, and comic book creator.
His work appears internationally in economic, intellectual, political and cultural magazines.
He is particularly known for his work for reformist papers in Iran and Persian language websites Radio Zamaneh, Tavaana: E-Learning Institute for Iranian Civil Society, and IranWire. He is also well-known because of his cartoons about Iranian presidential election, 2009.
He is the 2010 recipient of the Cartoonists Rights Network International Award for Courage in Editorial Cartooning.
He lives in France.

Mana was born in Tehran.
His father Manouchehr Neyestani (1936 – 1981) was a well-known Iranian poet from Kerman and his mother is from Tehran. Touka Neyestani a fellow cartoonist as well is Mana’s older brother. Mana has a master’s degree in Architecture from the University of Tehran
Mana began his professional cartooning career in 1989, and started drawing editorial cartoons in 1998, for Zan. During 1998-2000, he drew a large number of cartoons for various reformist newspapers, such as Asr-e Azadegan, Sobhe Emrooz, Mosharekat, Azad, Neshat (as a freelancer), and Aftab-e Emrooz (as a staff cartoonist). His cartoons are published regularly on the website of Iranian exile media Radio Zamaneh, as well asTavaana: E-Learning Institute for Iranian Civil Society and IranWire.
Mana Neyestani has authored several books, mostly Graphic Novels. The Adventures of Mr Ka is his most famous Comic book series and consists of 4 books, all in Persian.
Riots erupted by ethnic Azerbaijanis in Iran when they took offense to a Neyestani cartoon published in the children’s section of the 12 May 2006 supplement of Iran, a government-run newspaper. The cartoon depicted a cockroach responding in Azerbaijani. Neyestani, along with Mehrdad Ghasemfar, the editor-in-chief of Iran, were arrested by government officials and the newspaper was closed down following the riots.
Neyestani and the editor of the paper ended up in solitary confinement in Tehran’s Evin prison under conditions the cartoonist described as “Kafkaesque.” Three months later, Neyestani was given a temporary prison leave and used it to flee the country with his wife. He finally ended up in exile in France where he published a graphic novel titled “An Iranian Metamorphosis,” about his time in prison.