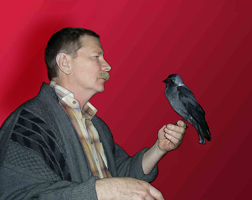 Was born on September 22, 1950 in Serpukhov, Moscow region, in the family of a military musician.
Graduated from the Higher Serpukhov Military Engineering School of Missile Forces.
The first cartoon was published in 1979 in the newspaper “Nedelya”, co-authored with Vasily Filippov, while serving at the missile test site in Kapustin Yar.
The first independent drawing was published in the Volgograd newspaper “Molodoy Leninets” in 1981. Subsequently, his cartoons were published in the newspapers: “People’s Tribune”, “Trud”, “Socialist Industry”, “Izvestia”, “Moskovsky Komsomolets”, “Lenin’s Banner” , “Sputnik”, “Workers ‘and Peasants’ Correspondent”, “Man and Law”, “Sankey Shimbun” (Japan); in regional and local media. In 1986 he starting cooperation with the editorial office of the magazine “Crocodile” and stayed there until its closure.
8-time winner of the annual award of the magazine “Crocodile”.

Multiple winner of cartoon contests in the newspapers “Trud” and “Rabochaya Tribuna”. A participant of foreign and domestic exhibitions.

Held a personal exhibition together with Vasily Dubov in 1992 in the Moscow cinema “Fitil”.
Member of the Creative Union of Artists of Russia.