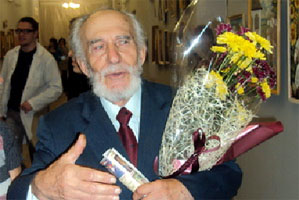 Was born on September 20, 1933 in the village of Novaya Kriusha, Voronezh region.
Graduated from the Moscow Correspondence People’s University in 1960, the department of “Drawing and painting”.
Worked as a teacher of drawing at schools and an artist in editorial offices of newspapers in Voronezh and other cities of the district.
The first caricature was published in 1954 in the regional newspaper “Kommuna”. He contributed to the magazines “Crocodile”, “Ogonek”, “Peretz”, “Chayan”, “Tourist”, “Rabkor”, “Agitator”, etc .; newspapers: “Pravda”, “Izvestia”, “Trud”, “Literaturnaya Gazeta”, “Soviet Culture”, “Komsomolskaya Pravda”, “Rural Life”, “Sovetskaya Rossiya”, as well as republican humorous media.
Participated at more than 30 competitions of cartoons (union and international), including the ones in Australia, Bulgaria, Belgium, Canada, Czechoslovakia.
Laureate of competitions of cartoons of the magazines: “Porcupine”, “Pepper”, “Agitator”; newspapers: “Komsomolskaya Pravda”, “Sovetskaya Rossiya”, “Trud”.

From 1953 to 2011 he held more than 60 solo exhibitions: caricatures, graphics, paintings, sculptures. The first personal exhibition “Don watercolors” was organized in the library of Pavlovsk, Voronezh region in 1953.
Three collections of cartoons were published.
Member of the club of cartoons “Masterpiece” in Voronezh.
The last revenge of work – the artist of the newspaper “Bereg”, Voronezh.
Articles on creativity in iso-art are published in the books “Legends of Voronezh” and “Historical and Cultural Reference of the Voronezh Region”.
He created more than 15,000 caricatures and illustrations, more than 1000 graphic and sculptural works.