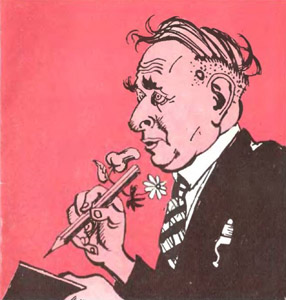 An outstanding Ukrainian graphic artist and painter. People’s Artist of the USSR.
Valentin Gavrilovich Litvinenko was born on August 28, 1908 in Kremenchug.
From 1929 to 1930 studied at the studio of N.Samokish in Simferopol.
From 1932 to 1934 studied at the Kharkov Art Institute.
In 1934 he moved to Kiev and worked as an artist and retoucher in the newspaper “Komsomolets Ukrainy”. On its pages he published his first cartoons.
From 1934 to 1935 studied at the studio of the artist IF Seleznev.
In 1941 was invited to work in the satirical magazine “Peretz”.
During the war years he created satiric graphics and posters.
After the war, in 1954, he creates a series of “Disappearing species of birds,” which depicts figuratively human depravity and weakness in images of birds.
Also hewas an illustrator of books.Worked in the technique of watercolors and gouache.
Member of the USSR Union of Artists.
Member of art exhibitions: republican – since 1944, all-Union – since 1946, foreign – since 1956.
Personal exhibitions were held in Kiev, Moscow and Leningrad.
Since 1958 is the “Honored Artist of the USSR.”
“People’s Artist of the USSR” – since 1960.
In 1969, he was awarded the Gold Medal “The Fighter for Peace” of the Soviet Peace Committee.
Was awarded with the Order of the Red Banner of Labor, Honorary Diploma of the Presidium of the Supreme Soviet of the Ukrainian SSR.
Works by Litvinenko V.G. are held in the National Art Museum of Ukraine, and in numerous museums, galleries and private collections in Ukraine and abroad.

“Masters of the Soviet Caricature”, Moscow, 1965