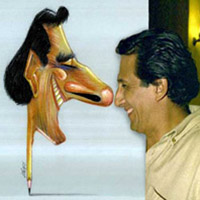 Began his career in 1980 with cartoons for “Procesca Films” and erotic humorous illustrations for the magazine “Tickle”. Published in the newspapers: “Expreso”, “Hoy”, “El Nacional”, “El Comercio”, “El bocón”, “Ajá”. For “OJO” painted 17 years. His most famous comics are Simeon, The Killer Combi and Karrycaturas.
At present he publishes his cartoons in the newspapers “Trome”, “Depor” and is responsible for political humor in “El Otorongo Peru21”. Also publishes cartoons in the French “Bellins Edition” and in the German online media “Toonpool”. Belongs to the editorial staff of “VJ Movement” (The Netherlands).
Published 2 humorous magazines “Monalisa”, “Simeon” and his book “Karry World”.
His cartoons “Water is a human right”, created with the support of The Federation of Unions of Water Workers of Peru (FENTAP), were collected in albums and translated into 5 languages. One volume was presented at the “ExpoZaragosa” 2008.