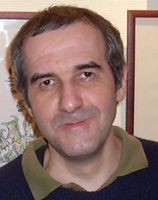 Worked as a props decorator, sometimes giving private lessons of painting and drawing. Also draw cartoons.
In 2006-2008 he collaborated with the magazine “Crocodile”.
As an illustrator, he worked with “Zebra E” publishing house, “Our School” editorial and publishing group, “Funny Pictures” and “Cyber ​​Kid” magazines.
From 2001 to the present is one of the regular illustrators of the children’s literary magazine “Kukumber”.
Took part in several Moscow caricature exhibitions.