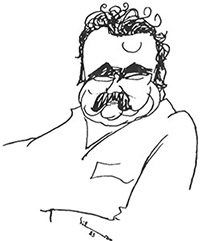 Was born on the 20th of February 1943.
Graduated from the Institute of Romanian Language and Literature in Bucharest.
Currently is working as a cultural instructor in the House of Culture of students in Timisoara.
In addition to cartoons, he is fond of cinema: animation and science fiction.
Participates in cartoon exhibitions in the country and abroad, often publishes his works in press.
The latest award: “the Golden Apple” at the festival of humor in Bistritsa in 1984.