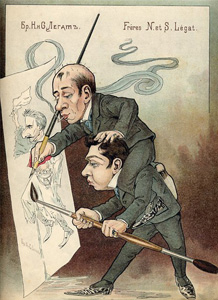 The brothers N. and S. Legat were people of broad artistic interests, dancers, choreographers, teachers, who created an extensive gallery of drawings, portraits and caricatures depicting their colleagues in the troop. Their works were assembled into a large album-folder “Russian ballet in caricatures” (St. Petersburg, 1903).

Legate Nikolai Gustavovich (1869 – 1937). Was a dancer with the Russian Imperial Ballet from 1888 to 1914, and also with the danced with the Mariinsky Ballet. He is considered to be the main successor to Pavel Gerdt. Legat later served as a balletmaster in Russia, teaching and passing on the legacy of the repertoire of that company, namely the work of the choreographer/balletmaster, Marius Petipa.
Legat’s wife, Nadine Nicolaeva, was Prima Ballerina of the Imperial and State theatres of Moscow and St. Petersburg. She choreographed dances based on the Movements Exercises of Gurdjieff and later founded the Legat School of Ballet in Kent. One of her students was Anneliese von Oettingen. Nadine Nicolaeva-Legat was a follower of P. D. Ouspensky. She choreographed dances based on the Movements Exercises of G. I Gurdjieff. In 1938, Ouspensky and his followers acquired Colet House in London, from Natine Legat, where they established the Historico-Psychological Society.

Legate Sergei Gustavovich (1875 – 1905). The younger brother of Nikolai Legat, he studied at the imperial ballet school with Pavel Gerdt, Christian Johansson, Lev Ivanov and his brother. Legat joined the Mariinsky Theatre in 1894 and quickly became a soloist. Admired for his stylistic performances he also taught, with pupils including Vaslav Nijinsky. Legat originated the dual role of the Nutcracker/Prince in Tchaikovsky’s famous ballet. He married Marie Petipa (1857–1930). Many of the male variations that make up the traditional classical ballet repertory were created especially for him at the turn of the 20th century.