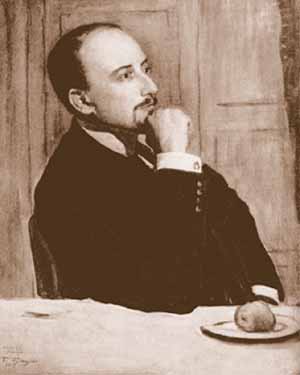 A Russian graphic artist, associated stylistically with Mir iskusstva (the World of Art).
Lanceray was born in Pavlovsk, Russia, a suburb of Saint Petersburg. He came from a prominent Russian artistic family of French origin. His father, Eugeny Alexandrovich Lanceray, was a sculptor. His grandfather Nicholas Benois, and his uncle Leon Benois, were celebrated architects. Another uncle, Alexandre Benois, was a respected artist, art critic, historian and preservationist. His great-grandfather was the Venetian-born Russian composer Catterino Cavos. Lanceray’s siblings were also heirs to this artistic tradition. His sister, Zinaida Serebriakova, was a painter, while his brother Nikolai was an architect. His cousin, Nadia Benois, was the mother of Peter Ustinov.
Lanceray took his first lessons at the Drawing School of the Imperial Society for the Encouragement of the Arts in St. Petersburg from 1892 to 1896 under Jan Ciągliński and Ernst Friedrich von Liphart. He then traveled to Paris, where he continued his studies at the Académie Colarossi and Académie Julian between 1896 and 1899.
After returning to Russia, Lanceray joined Mir iskusstva, an influential Russian art movement inspired by an artistic journal of the same name, founded in 1899, in Saint Petersburg.[5] Other prominent members of Mir iskusstva included Lanceray’s uncle Alexandre Benois, Konstantin Somov, Walter Nouvel, Léon Bakst, and Dmitry Filosofov.
Like other members of Mir iskusstva, he was fascinated with the «sparkling dust» of Rococo art, and often turned to 18th-century Russian history and art for inspiration.
Lanceray was the only prominent member of Mir iskusstva to remain in Russia after the Revolution of 1917. Even his sister found the revolutionary milieu alien to her art and, in 1924, she fled to Paris.
Lanceray left Saint Petersburg in 1917, and spent three years living in Dagestan, where he became infatuated with Oriental themes. His interest increased during journeys made in the early 1920s to Japan and Ankara, Turkey. In 1920, he moved to Tbilisi, Georgia. During his stay in Georgia, he lectured at the Tbilisi State Academy of Arts (1922–1934) and illustrated the Caucasian novellas of Leo Tolstoy. Amongst his students were Apollon Kutateladze.
Lanceray left Georgia in 1934, settling in Moscow, where he became involved with decoration of the Kazan Railway Station and the Hotel Moskva. During this same period, Lanceray also worked as a theatrical designer.Three years before his death, he was honored with the Stalin Prize. He died in Moscow at age 71.
https://en.wikipedia.org/wiki/Eugene_Lanceray 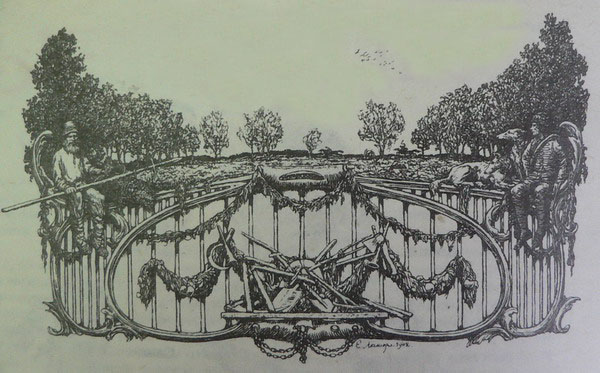