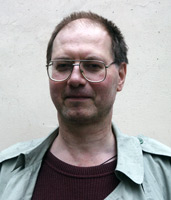 He was born in the town of Antratsit (Ukraine). First publication came out in 1980 year. He has neither high, nor art education.
The oldest Russian magazine Vokrug Sveta (“around the world”, has been publishing since 1861 year), by which he was granted the First Prize for novel illustrations, proposed him a position of chief art designer, but for some reasons he refused.
He took part in international cartoon competitions hold in Belgium, Bulgaria, Ukraine, Canada, Japan, Italy, Poland etc.

Has 10 prizes, among them are:
Third Prize – Zaporozhie, 1989 (Ukraine)
Grand Prix – Dneprodzerzhinsk, 1994 (Ukraine)
First Prize – Tyumen, 1994 (Russia)
Second Prize – Dneprodzerzhinsk, 1995 (Ukraine)
Third Prize at the competition Not only IN VINO VERITAS” – Moscow, 2002 (Russia)
For a long time he had been a free artist, collaborated with the biggest business Russian newspaper Commersant-Daily”. His hobby is to sit in Internet digging into different web-sites. At present time he works as a chief art designer of monthly illustrated magazine Japan Today”.
Reference: BEC (the Big Encyclopedia of Caricature), 2007