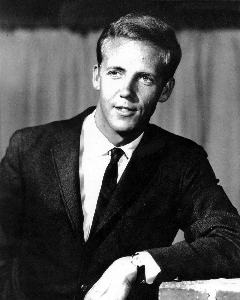 American cartoonist born in Phoenix, Arizona, on April 20, 1933. Lee Holley displayed a love of cartooning at an early age, and he started selling his cartoons at the age of 15. He attended Chouinard Art School in Los Angeles, and in 1954 he joined the Warner Brothers animation studio, where for three years he worked on Bugs Bunny, Road Runner and Daffy Duck cartoons, as well as on a number of Porky Pig comic books. In 1957 he became assistant to Hank Ketcham, helping him draw the Dennis the Menace Sunday feature.

All the while Lee Holley kept submitting cartoon ideas to syndicates, and in 1960 he finally succeeded in selling a teenage panel to King Features. Called Ponytail, it is now running daily and Sundays. Drawn in a seemingly slapdash but effective manner, it tells of the everyday trials and tribulations of the title heroine and her teenage cohorts. While the theme is neither new nor startlingly original, Holley has been able to impact to it an impish charm that redeems its more obvious and hackneyed situations.