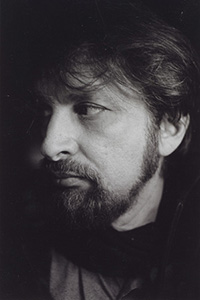 Born in Fremont, Ohio, Holland began sending drawings to Walt Disney and the Saturday Evening Post newspaper at the age of 15. At 17, after receiving a box of his drawings back from Disney with a rejection letter for a Mickey Mouse hat, as well as numerous rejection letters from the Saturday Evening Post, Holland took a bus to Chicago, where he found odd jobs, including sweeping the floor at a tattoo parlor. At the age of 20, the artist was hired by Hallmark in Kansas City to illustrate books as a full-time artist. Among the books he illustrated for Hallmark was A Christmas Carol by Charles Dickens. In 1967, at the age of 23, Holland moved to New York to pursue a career as a freelance illustrator.

Although Holland’s first outstanding editorial feature work appeared in Avant-Garde magazine in 1968 under the artistic direction of Herb Lubalin, two important milestones in Holland’s early career were when he became a regular Playboy contributor starting in 1967 and in 1970. he has established himself as a frequent author. to the page of the article in The New York Times. In Playboy, his talent was first recognized by art director Art Paul, who, after seeing the artist’s work, invited him to become a monthly author. Holland ‘s monthly contributions to Playboy accompanied Ribald Classics .Holland’s New York Times column was introduced by Jean-Claude Suarez, the first art director of the commentary page, who is credited with creating the first illustrations on the editorial page of the New York Times. Holland’s contribution to the Times article was seen as a fundamental shift in how illustrations could be used in print, as more often than not Holland viewed art and text as two separate elements.

In 1969, Holland and Steven Heller founded the short-lived Asylum Press, created to present and promote the work of artists and designers on underground and alternative press resources. After the failure of the New York Review of Sex, Heller became the art director of Screw: The Sex Review, for which Holland made several covers.

Holland’s drawings, in particular those concerning the Watergate scandal of the Nixon administration, became the largest work published in the first book of journalistic articles: “The Art of Time” edited by Jean-Claude Suarez and published in 1973 by Darien House. In the same year, Holland would accompany Suarez when the art director organized an exhibition of articles from the Times newspaper at the Museum of Decorative Arts in Paris.

By 1986, the artist had established himself so firmly in the graphic community that the Washington Post called Holland “the undisputed star of American illustration.” In an article for Print magazine , author Stephen Heller wrote: “As Pollock changed the definition of plastic art, Holland radically changed the perception of illustration.”

In Holland’s ink drawings, which were most prominent on the New York Times column page, the artist mentioned the German satirist Heinrich Clay and the Austrian expressionist Alfred Kubin, who significantly influenced his own black-and-white works. The artist also considers the Mexican muralism of the 1920s to be a source of considerable inspiration and, in particular, “Los Tres Grandes” (three great ones): Rivera, Orozco and Siqueiros .  The artist also believes that Nathaniel Hawthorne’s stories influenced his feelings.

While the use of visual metaphor is now taken for granted in the illustration world, when Holland took the field, it wasn’t. This was the generally accepted standard of the time (1968), when art directors dictated or implied what they wanted the illustrator to create in the form of a completed assignment. When Holland started illustrating, his philosophy was completely different from what his predecessors had considered common practice. He vowed never to embody someone else’s idea, but always to find a better, more personal solution for any illustration assignment he could accept. There are several illustrators whose work has led to fundamental and lasting changes in this dictatorial method of artistic leadership, and Holland can be considered one of the first. The artistic director of the New York Times, Jean-Claude Suarez, can also take great credit for this fundamental curatorial change in the way illustration was viewed from a top-down profession of “do as you’re told” to a more artist-oriented form of artistic communication. In Suarez’s obituary in the New York Times, Holland is quoted as saying that he (Suarez) “gave us the opportunity to redefine what graphic art can be and what it can be.”

When Holland first worked with Harrison Salisbury at the New York Times , he said: “Imagine that you locked the writer in one room and me in another and gave us both the same task. a picture; you will marry the two of them.” Because of Holland’s artistic philosophy at the time, the long-held assumption that commercial illustration should simply reinforce text had to come to an end quickly, and his artistic legacy would be largely based on these historical milestones.

By the mid-1970s, Holland’s use of visual metaphor, known by this point as “conceptual illustration”, had become so solid and widespread that the art director of journalism, Stephen Heller, said that only 25 percent of the authors of journalism knew the content of the articles. their work was to accompany.

Protecting the interests of authors

In 1999, Holland and a small group of artists founded the American Illustrators Partnership (IPA). The initial goal of the IPA was to raise artists’ awareness of the growing influence of illustration houses and how these businesses could potentially devalue art by offering on-demand art buyers the opportunity to purchase art rights for pennies on the dollar, compared to what they used to pay for. The IPA viewed the growth of stock illustration as the most devastating event in the history of the commercial art profession . The solution to this problem, advocated by the Netherlands and the IPA, was a rights management agency run by artists that could coexist with labor and antitrust laws.

In 2007, the American Society of Illustrators (ASIP) was created on the initiative of The Illustrators’ Partnership of America with Holland as a member of the founding council. The main stated purpose of ASIP was to inform its members and others about the rights of illustrators to receive royalties and license fees for the use of their works.

In 2008, Holland and Cynthia Turner, a board member of the American Illustration Partnership (IPA), submitted comments to the Judicial Committee regarding the 2008 Orphan Works Bill (Works with unknown or lost authorship data) and its potential threat to artists’ rights. Although the bill was passed by the Senate and received broad support in the publishing community, it lost support in the House of Representatives and did not pass.

As an indirect consequence of IPA’s involvement in the Orphan Works Act of 2008, in 2008 IPA was sued for one million dollars for libel by the Guild of Graphic Artists (GAG), with Holland listed as the main defendant. GAG filed libel and interference with contractual relations, claiming that the IPA interfered with the “business relationship” that GAG entered into, which allowed GAG to collect royalties for unattended reproduction received from licensing the work of illustrators. GAG claimed that the IPA’s efforts to create a collection society to return lost royalties to artists “interfered” with GAG’s “business” of collecting these orphan royalties. As for the main issue in the trial: That GAG “secretly” appropriated more than one and a half million dollars of illustrators’ fees, the judge presiding over the case ruled that the IPA’s statement was true, and that a defamation case could not be initiated on the basis of a statement of fact. The case against IPA and Holland was dismissed. In 2000, GAG awarded Holland the Walter Hortens Distinguished Service Award for his articles and speeches on the impact of stock illustration agencies on the freelance illustration business.

In 2012, the US Copyright Registration Office again addressed the problem of orphan works, in particular, orphan works and mass digitization. Holland and IPA board member Cynthia Turner presented the IPA once again, reiterating their previous position that copyright reform advocates are doing this because they want the national wealth of copyright to pass from individuals to a few select corporations.