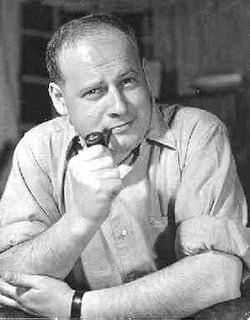 British cartoonist, writer, musician, speaker and eccentric, born in Berlin, Germany, on March 22, 1925.
To those who saw him and heard him it is impossible to think Gerard Hoffnung has been gone for so long.
His rise to fame was meteoric, and his memory continues to delight through reprintings of his books, recordings of his broadcasts and speeches, and restagings of his extraordinary tongue-in-cheek music festivals that rocked London in the 1950s.
Gerard Hoffnung, so superbly British, was a student at the Highgate and Harrow School of Arts and Crafts under J.G. Platt, and then served as art master at Stanford School (1945) and assistant art master at Harrow (1948). In between, in 1947, he worked as a staff artist on the London Evening News, contributing funny little “spot” drawings and column-breakers that livened the tabloid pages of the time. In 1950 he went to New York to draw for the Cowles chain of magazines, returning to England the following year to freelance in art and his main hobby, music. He drew for Punch, Lilliput and other weeklies, illustrated books for children, and became a regular radio broadcaster for the BBC, delivering superb and lengthy anecdotes in a rich, fruity voice. In 1956 he created the Hoffnung Music Festival, which became a regular and hilarious treat at the Royal Festival Hall, a kind of upper-crust Spike Jones show. It became the Hoffnung Interplanetary Music Festival for 1958 and 1959.

He died quite suddenly in 1959, at the age of 34: everyone thought him a much older man. His cartoons, much collected, are eternally witty, and the John Halas-Joy Batchelor animation studios converted a number of his little books and sequences into a technicolor Tales from Hoffnung, which remains among that studio’s best work.