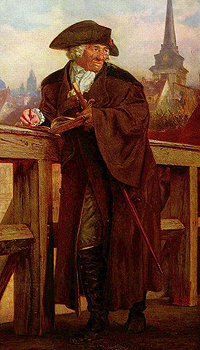 He was born in the city of Danzig (Gdańsk) in Poland, and in a letter “in typical Berlin humor wrote, “that he moved to Berlin, Germany, which shows for sure, that he is a ‘genuine Pole’. He kept close to the Huguenot scene, due to his ancestry.

His grandfather Bartholomāus Chodowiecki had lived in the 16th century in Greater Poland. Gottfried Chodowiecki, Daniel’s father, was a tradesman in Danzig and his mother, Henriette Ayrer born in Switzerland, was a Huguenot. Daniel’s grandfather Christian had been a tradesman in the city as well. When his father died, both Daniel (aged 16) and his younger brother Gottfried Chodowiecki went to live with their uncle in Berlin, who offered to educate them, and where Daniel received an artistic training with the painter Haid in Augsburg. His brother also became a painter.