Born in Leipzig, Heine established himself as a gifted cartoonist at an early age, which led to him studying art at the Dusseldorf Art Academy and, for a short course, at the Academy of Fine Arts in Munich.

In 1896 , he became a successful illustrator and political cartoonist for the satirical Munich magazine Simplicissimus , for which he appropriated the stylistic idiom of Art Nouveau (Art Nouveau (“Youth style”) was an artistic movement, especially in decorative and applied art, which had an influence mainly in Germany and to a lesser extent in other European countries from about 1895 to 1910) and the graphic qualities of Henri de Toulouse-Lautrec, Aubrey Beardsley and Japanese woodcuts.  An illustrated critique of public order and, in particular, the monarchy, which he made for the magazine, led to a six-month prison sentence in 1898. He also began working as a book illustrator in the 1890s.

He fled Germany in 1933, first to Prague. From 1938 to 1942 he lived in Oslo, and from 1942 until his death in 1948 he lived in Stockholm. In 1942 he published a very cynical autobiography, Ich warte auf Wunder. Although Ich warte auf Wunder does not claim to be an autobiography or a novel, it was written in 1941, when Hitler was in power in Germany and the Second World War was underway. Despite the author’s statements, this is a novel based on the events of that time, in particular, on the events in Munich during the German Revolution of 1918-1919, the Bavarian Soviet Republic and the rise of National Socialism from 1920 to 1925. Hitler is unfavorably portrayed as a character named “Icarus”, a soldier who first hypnotized the Munich public in a chapter entitled “Mass Assembly”. It also depicts with less accuracy Hitler’s attack on the separatists on September 14 , 1921 .Otto Ballerstedt, as a result of which Hitler was convicted and sentenced to 100 days in prison. 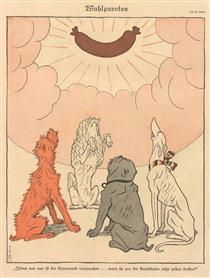