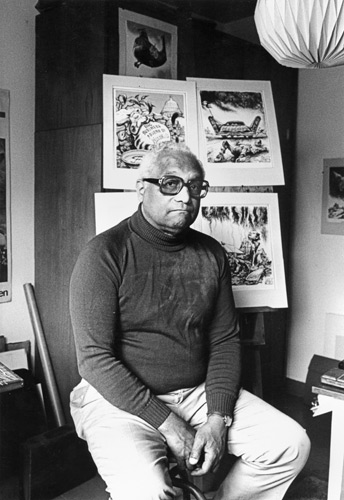 Harrington was born to Herbert and Yuzsenia Turat Harrington in Valhalla, New York, and was the eldest of five children. He began drawing cartoons to express his frustration with an evil sixth grade teacher who was racist, and graduated from DeWitt Clinton High School in the Bronx in 1929.

Immersed in the Harlem Renaissance (was an intellectual and cultural revival of African-American music, dance, art, fashion, literature, theater, politics, and science centered in Harlem, Manhattan, New York City spanning the 1920s and 1930s.), Harrington found work when Ted Poston, city editor of Amsterdam News, learned about Harrington’s already significant skills as a cartoonist and political satirist. In 1935, Harrington created the cartoon “Dark Laughter” for this publication. Later, the tape was renamed “Bootsy” in honor of the most famous character, an ordinary African-American who faced racism in the United States, Harrington described him as “a cheerful, rather well-fed, but sincere character.” During this period, Harrington joined the Faculty of Fine Arts at Yale University.to get a degree, but was unable to graduate due to the entry of the United States into World War II.

On October 18, 1941, he began publishing the weekly adventure comic “Jive Grey” (1941-1951) about the African-American pilot of the same name; the strip continued until Harrington moved to Paris.

During World War II, the Pittsburgh Courier sent Harrington as a correspondent to Europe and North Africa. In Italy, he met Walter White, the executive secretary of the NAACP. After the war, White hired Harrington to develop the organization’s public relations department, where he became a prominent and outspoken advocate for civil rights.

In this capacity, Harrington published Terror in Tennessee, a controversial expose of the rise of lynching violence in the South after World War II. Given the fame that his sensational criticism caused, Harrington was invited to a debate with U.S. Attorney General Tom Clark on the topic “The Fight for Justice as a global force.” He railed against Clark for the U.S. government’s failure to curb lynching and other racially motivated violence.

In 1947, Harrington left the NAACP and returned to caricature. In the post – war period , his fame and public activism attracted close attention from the Federal Bureau of Investigation and the House Committee to Investigate Un – American Activities . Hoping to escape further government control, Harrington moved to Paris in 1951. In Paris, Harrington joined a thriving community of African-American writers and expatriate artists, including James Baldwin, Chester Himes and Richard Wright, who became close friends.

Harrington was shocked by the death of Richard Wright in 1960, suspecting that he had been murdered. He thought that the American Embassy had carried out a deliberate campaign of persecution aimed at expatriates. In 1961, he applied for political asylum in East Germany. He spent the rest of his life in East Berlin, finding a lot of work and cult followers. He illustrated and participated in publications such as Eulenspiegel, Das Magazin and the Daily Worker.