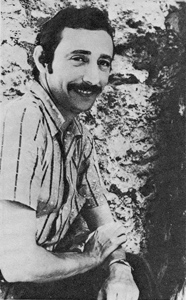 He was born in 1943 in Manzanillo.
He graduated two postgraduate courses in the Department of Fine Arts History of Havana University.
His first cartoons Haner published in the magazine “Verde Olive”.
Since 1963, he collaborated in the magazine “DDT”.
He is the author of a multi-series comic fairy tale in pictures “The Lost World of Mollusks”.
He published a book “On the Lost World and Other Things”.
Hanner’s drawings were published in many foreign magazines – the Bulgarian “Styrshele”, the German “Oylen-spiegel”, the Canadian “Daily Toronto” and others.
Haner is a participant of many competitions at home and abroad. He was awarded the first prize of the National Salon of Humor “Horacio Rodriguez Suria” seven times and twice – the first prize of the Youth Drawing Salon.
Haner is an artist of the magazine “DDT”.