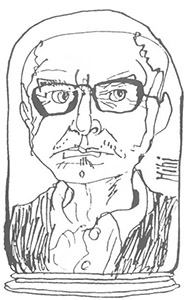 Сartoonist.
Born in Budapest in 1932.
There he graduated from the Faculty of Applied Graphics of the Institute of Fine Arts.
As a student, he showed his works at the exhibition of cartoons at the National Salon in Budapest (1953).
Subsequently, he regularly participated in various national and foreign exhibitions: applied graphics (1963), newspaper and magazine drawings (1964), calendars (1965), posters (1968), cartoons (1970), the anniversary exhibition of cartoons (1975) – in Budapest. In addition to these expositions, his works were shown at caricature exhibitions in Montreal (1967), West Berlin (1978) and Vienna (1972).
He has been working at Ludash Mati since 1957. In 1960, the publishing house of the Art Foundation published an album of his cartoons “Miracle Insects”, and a few years later one of the series of satirical drawings was awarded the Munkachi State Prize. The works of recent years were shown in 1981 at a solo exhibition at the Helikon Gallery in Budapest.
Quote from the book “Visiting artists of the Hungarian satirical magazine LUDASH MATI” series “Masters of caricature of Socialist countries”, 1981.