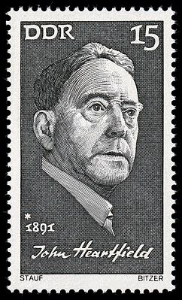 Was an artist and a pioneer in the use of art as a political weapon. Some of his photomontages were anti-Nazi and anti-fascist statements. Heartfield also created book jackets for authors such as Upton Sinclair, as well as stage sets for such playwrights as Bertolt Brecht and Erwin Piscator.

John Heartfield (Helmut Herzfeld) was born on 19 June 1891 in Berlin-Schmargendorf. His father was Franz Herzfeld, a socialist writer, and his mother was Alice (née Stolzenburg), a textile worker and political activist.
In 1899, Helmut, his brother Wieland Herzfeld, and his sisters Lotte and Hertha were abandoned in the woods by their parents. For a while, the four children resided with an uncle in the small town of Aigens.
Heartfield, his brother, and George Grosz launched the publishing house Malik-Verlag in 1917.
In 1908, Heartfield studied art in Munich at the Royal Bavarian Arts and Crafts School. Two commercial designers, Albert Weisgerber and Ludwig Hohlwein, were early influences.