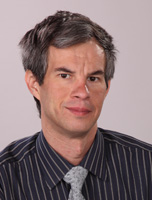 He graduated from secondary school № 8, then SPTU №6, worked as a carpenter in BC KECh, then enrolled in Nemirovsky Construction College, from where graduated in 1995 as a technician-builder.
Also studied at the children’s art school at the Palace of Culture Shinnik (head artist Bolshakov VL).
The first caricature was published in 1984.
Contributed to the magazines Crocodile Plus, Crocodile in Ukraine, Peretz and other publications in Ukraine.
Participated in many international and Ukrainian cartoon contests.
Member of the Union of Artists in Belaya Tserkov.
In addition to cartoons he is engaged in computer design.

In 1995 he took part in the International Cartoon Contest “Tears only from laughter”.
1996 – the 5th anniversary of the concern “DENDI” (Kiev)
1996 – 10th anniversary of the tragedy in Chernobyl (Belaya Tserkov, Slavutich)
1996 – 132 years of activity of the Red Cross (Belaya Tserkov)
1996 – in April, the first personal exhibition of cartoons was held in the Local History Museum (Belaya Tserkov)
1996 – the first book with drawings “Zhart-Ptitsa” was published (Poems by V. Yevtushenko)
1997 – two exhibitions of caricatures in Vinnitsa
1998 – published his works in literary art almanac “Letter”
2001 – entered the structure of the publication artists-amators of Ukraine for 50 years (Ukrainian Center for Cultural Studies)
2009 – participated in the International competition of caricatures “Euro-2012” (Odessa)
2009 – 4th personal exhibition of caricatures at the Center for Social Relations and Culture (Belaya Tserkov)
2010 -5th participant of the Ukrainian Cartoon Contest “Discrimination 2010”
2010 – participant in the contest of cartoons “Football unites us” (Ukraine, Kherson)
2010 – participant of the contest of cartoons “Cosmos. Smile Gagarin “(Russia, Moscow)
He held five solo exhibitions, in the city of Belaya Tserkov-3, in Vinnitsa-2.
Two books with drawings have been published.