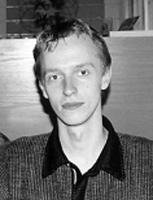 He was born on August 5, 1981 in Grodno. He graduated from the Mathematical Faculty of the University as a mathematician in 2003. He worked in the general education school as a teacher of mathematics, and as a designer in a printing house.
The first cartoon was published in 1999. Published in the magazines Vozhyk, 15 days, etc.
Participant of many international cartoon contests.
Special prize at the competition “Independence” (Kiev) 2001.
In 2001 he held a solo exhibition in Grodno.