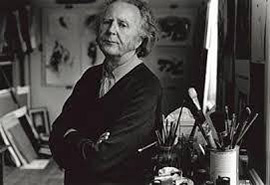 Counihan was born on 4 October 1913 in Albert Park, then a working-class suburb of Melbourne. He attended Caulfield Grammar School in 1928. He studied part-time under Charles Wheeler at the National Gallery of Victoria Art School in Melbourne during 1930-31, where he met the social realists Herbert McClintock and Roy Dalgarno.

Social realism, the belief that art should reflect the realities of society under capitalism, was the artistic doctrine of the Communist Party of Australia, and in 1931 Counihan became a confirmed atheist and a member of the Party. He helped found the Workers Art Guild, and began printmaking, producing linocuts and lithographs for Communist magazine covers and pamphlets as well as designing banners.

During the Great Depression Counihan participated in the “free speech” fights in Brunswick, organised by the Communist Party in response to a Victorian state government law banning “subversive” gatherings. Dozens of members of the Unemployed Workers Movement were arrested, and unemployed meetings at the intersection of Phoenix Street and Sydney Road, Brunswick were dispersed by police. As part of this fight, a young Counihan addressed a crowd from a locked cage on top a truck. Police had to cut him out, to the jeers of the crowd, as he continued speaking.

From 1934 Counihan worked as a cartoonist for various publications, including The Bulletin and the Communist Party’s paper, the Guardian from 1945 to 1949 and again from 1952 to 1958. He spent extended periods in hospital with tuberculosis during the Second World War. With the encouragement of the artist Yosl Bergner, he began to paint. He developed a personal style based on the social realist approach, producing compassionate images of workers and their working lives. Counihan maintained that the artist had a duty to “gather information from the political developments of the time.”

His 1955 painting On Parliament Steps won the George Crouch Memorial Prize in 1956.

Counihan remained loyal to the Communist Party during its various splits and despite its declining support in the 1970s and 1980s.

His 1973 posthumous portrait of Hugh Gemmell Lamb-Smith — who had taught Counihan at Caulfield Grammar and, as well, had encouraged his artistic endeavours whilst he was there — largely painted from memory, and commissioned by the Caulfield Grammarians’ Association, is on permanent display within the school’s “Cripps Centre” on its Caulfield Campus.

In 1979, Counihan contributed the entry on footballer Roy Cazaly to Volume 7 of the Australian Dictionary of Biography.