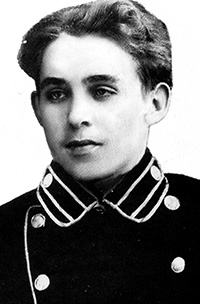 Aleksei Yeliseyevich Kruchonykh (Russian: Алексе́й Елисе́евич Кручёных; 21 February 1886 – 17 June 1968), a well-known poet of the Russian “Silver Age”, was perhaps the most radical poet of Russian Futurism, a movement that included Vladimir Mayakovsky, David Burliuk and others. Together with Velimir Khlebnikov, Kruchenykh is considered the inventor of zaum. Kruchenykh wrote the libretto for the Futurist opera Victory Over the Sun, with sets provided by Kazimir Malevich. He married Olga Rozanova, an avant-garde artist, in 1912.

He’s also known for his Declaration of the Word as Such (1913): «The worn-out, violated word “lily” is devoid of all expression. Therefore I call the lily éuy – and original purity is restored».