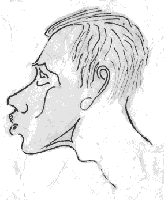 Born on October 21, 1937 in Moscow.
Studied medicine in Saratov Medical Institute. In 1976 defended a master’s thesis. Since 1998 works as a TB specialist in the pulmonary ward of the TB dispensary of the Zavodskoy district of Saratov.
Published his 1st caricature in the paper “Zarya molodezhi” (Saratov), and the 2d and others     —     only after 25 years of silence. His works were published in “Komsomolskaya pravda”, “Izvestiya”, “Medicine paper”, “Trud”, “Crocodile”, “Tourist”, “The Soviet Union”.
Won the award of the cartoon competition the paper “Zarya molodezhi” in Saratov (1990).
The non-official personal exhibition was held in October 1994 in Saratov.
A number of his caricatures are published in the book “One of Them” (the memories and thoughts of the TB doctor).
A permanent member of the board of the Saratov Regional Society of Sobriety and Health since 1987. Published several books, including collections of poems. Continues working as a doctor.