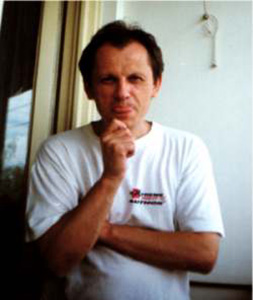 He graduated from the Technical College of Construction in Trencin in 1969.
He continued to study at the Faculty of Architecture of the Slovak Technical University in Bratislava, but left school before the end of the first semester and began to work as a freelance artist.
He published his first cartoon in 1967.
Since then ten thousand drawings by Lubomir Kotchri have been published in more than 100 different newspapers and magazines in his homeland and abroad.
His works were exhibited in several personal and a large number of collective exhibitions in many countries.
He published his own book of cartoons “Diagnosis XY”, and also created illustrations for about 20 books and calendars (the last one is “Slovak Gold Book of Humor”).
He also created posters and animation.
Creative works of Lubomir Kotrchy were awarded with more than 100 international prizes at the international contests of cartoons in many countries of the world (including: Cuneo 1990 – first prize, Tokyo 2005 – Grand Prix, Skopje 1994 – second prize, Akshehir 1988 – the first prize).