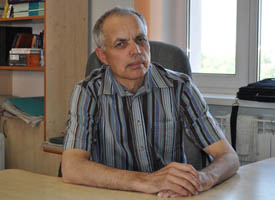 Was born on September 23, 1952 in the village of Verkhnyaya Toima of the Arkhangelsk Region. Worked as a senior process engineer of the water transport at the Turdeevskaya log-yard of the Isagorsk Lesobazy, later became the publisher of his own humorous paper for adults “Humour and Ero” and “The Nonsense” for children.
Contributed to newspapers and magazines, such as “Crocodile”, “Tourist”, “Economic Paper’, “Krugozor”, “The Soviet Sport”, “Evening Moscow”, “Evening Leningrad”, “Literaturnaya Gazeta”, “Spid-Info”, “Vokrug Smeha”, “Komsomolskaya Pravda” and many others.
Won 1st and 2d prizes at the competitions held by “Spid Info” (twice), “Trud”, “Crocodile”, “Economics and Life”.
Published the book “Funny Northern Limericks” illustrated by his own pictures, and in 2005    —    his own collection of caricatures.
Had several personal exhibitions in the cinemas of Arkhangelsk.