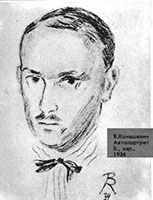 Vladimir Mikhaylovich Konashevich was a Russian graphic artist and illustrator. Among his artwork are scores for Manon Lescaut and Andersen’s The Fairy Tales.

Konashevich also illustrated the works of Samuil Marshak and issues of the publishing house Academia. His story O sebye i svoyom dele (About Me and My Work) was published in 1968.